Notice: Due to COVID-19, we will be conducting all consultations either via video chat, phone, or email. Please don’t hesitate to call us if you have any questions! 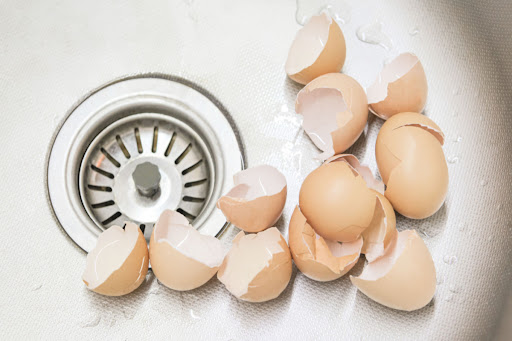 As tempting as it may seem, not all things are meant to be poured down your drain. Even some of your favorite foods probably shouldn’t be going down the drain, despite the fact you’ve done it before, and it didn’t cause a problem. Eventually, these products lead to desperate calls for a residential plumbing service and can create expensive repair bills. These eight things should never go down your drain, and throwing them in the trash can save you a lot of money now and in the future.

Everyone hates all that grease and fat, especially after cooking a delicious meal. It’s tough to know exactly what to do with it after you’re done, but the worst way to dispose of grease and fat is by throwing it down a drain. These substances are super sticky, meaning that even if they don’t clog your drain, they will attract dirt and other substances that stick to the sides of your drain and make it harder for products to go down safely.

It’s easy to think you can swap out toilet paper with paper towels, but your drain won’t be happy about it. Paper towels are one of the most common ways to clog your pipe, and homeowners far and wide are responsible for accidentally throwing a few paper towels in their toilets here or there.

Paper towels, in general, aren’t meant to dissolve in water and are bad for the environment and local sewage treatment plants. While these water treatment plants are modern and much more accepting of the occasional toilet paper, homeowners risk trapping paper towels deep in the drain.

Paint should never be poured down drains, and it is one of the most serious offenses you can commit to them. Many locations have laws and regulations about pouring water or oil-based paints down your drains, and some homeowners have to dispose of their paint at a hazardous waste facility. Why so much of an emphasis on this? Paint likely won’t clog your drains, but that paint will get into the water supply and can contaminate it with nasty toxins and chemicals.

Who doesn’t love a good morning coffee? We all have experienced those days rushing to make our morning coffee before we’re late to work, but that’s no excuse to throw those coffee grounds in the sink. Most plumbers will agree that coffee grounds are up there on the list of products that cause clogging, so you should never put them down your drains. As small as they may seem, you should still dispose of them in the garbage, and when in a rush, leave them until you get back home.

If you think pouring coffee grounds in your sink is bad, imagine putting your whole morning breakfast down the drain. Eggshells are one of the items that can get stuck in grease and fat that you pour down your sink or damage your garbage disposal blades. Eggshell membrane may even get stuck on your disposal grinder, making it easier for other blockages to occur.

Medication — similar to paint — won’t clog your pipes, but it can contaminate the water supply. In the worst-case scenario, your medicine can directly impact someone else’s water down the street, and they are also an environmental risk. Over-the-counter drugs can potentially leak into the groundwater in homes with septic tanks. Drugs may slip into rivers and lakes in homes connected to treatment plants, impacting marine life or floating further down into community water supply lines.

First off, pouring cooking oil down your drain is illegal. The oil can harden deep within your kitchen sink, reducing the space your pipe has to process the other gunk that travels inside. Not only can it harm your pipes, but cooking oil can also have a major impact deeper in the sewage system. When it interacts with the other chemicals and cleaning products meant to decompose waste and oxidize pipes, they form a soapy substance called a fatberg. Over time, fatbergs can grow and take over pipes, resulting in major repair costs.

While it might occasionally slip into your kitchen pipe, rice is another one of those things you should never put down your drains. Rice absorbs water, so while it’s in your pipe, those little rice grains expand and take over more of the line. Pour enough down the drain, and you can have a huge mess that takes up almost 3 or 4 times the amount of space that a regular grain would. Even cooked rice absorbs water, so don’t think you’re off the hook with that either.

Accidents Happen, so Turn to a Professional Drain Cleaning Company for Help!

As much as you try to avoid them, sometimes these products accidentally fall into your drains. Kitchen drain catchers can sometimes raise and let rice slide in, or it may simply slip your mind to not throw the wipe down the toilet drain. Every homeowner deserves to have a company that’s got their back, and that’s why you should turn to Good News Plumbing & Drain Inc.

With our drain and sewer services for Glendora, CA, residents and homeowners won’t have to sweat accidental clogs. Contact us today and learn more about how and why our plumbing and drain specialists are right for you!